Old Broome families remember Yasukichi Murakami. Many have photographs of their family members taken by him in their homes. Others have grown up with Yasukichi’s children, and some to the Murakami family through marriage. People in Broome respect their history, and read the many books written about their town, many of which mention Yasukichi. There is a Murakami Road on the way to their new jetty with a sign erected by the Shire with information about him and his contribution to the town.

The audience in Broome were well-informed with their history, and soulfully connected to the story of Yasukichi Murakami – Through a Distant Lens. They laughed and cried a lot louder, they talked, as they saw projected, photographs of people they remembered. For Broome’s Nikkei community and their friends of mixed heritage who lived and worked together before Broome’s rapid population growth, this performance touched upon their specific history, their contribution to pearling, and their hardships, including the almost forgotten Japanese internment during WW2.

There were 212 people interned from Broome. In the audience were former internee and Broome Counsillor Philip Matsumoto and Ben Shiosaki, who had returned from Mullewa to Broome for the first time since he was 6 years old when he and his family arrested as enemy aliens.

Showing Yasukichi Murakami – Through a Distant Lens in Broome was important. As Annette Shun Wah from Performance 4a, the producer of this work aptly billed it, we were “bringing Murakami home to Broome.” With Shinju Matsuri Festival board member Chris Maher working diligently in the background, the Broome Shire President Graeme Campbell hosted a civic reception before the show opened for the Murakami family, welcoming them back to their town. 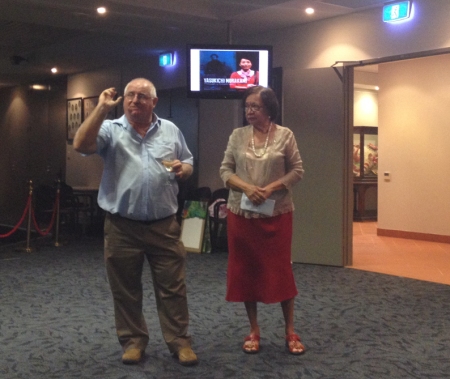 Murakami family members arrived in Broome for this occasion from Perth, Karratha, Fitzroy Crossing and Darwin. Nikkei community Elder Pearl Hamaguchi gave a moving speech honouring the family, and remembering those community members interned during the war, including her own father Jimmy Chi. She presented the Shire with a framed copy of Yasukichi Murakami’s invention – his improved diving suit design which became the basis for the modern-day scuba equipment.