Unlike my usual visits to Yasukichi Murakami’s grave at the Japanese War Cemetery in Cowra,  on 9th of March 2014, I heard many voices of those alive today, and not just the dead and buried.

For sometime now I have entertained an irrational thought that Yasukichi Murakami’s ghost was calling to me to fulfill his wishes, and on this day, at least part of my irrational belief  as to his wishes came to be. Not only was his grave visited by 6 of his family members, but nearly 200 people gathered to commemorate the civilian internees who died in internment camps across Australia during World War II .

The commemoration was part of a series of events held in Cowra, NSW including a symposium, Civilian Internment in Australia during WWII: history, memories and community heritage, its related arts program, the Cowra Canowindra Civilian Internment Arts Program and an unveiling of an interpretive board with information about Japanese civilian internment in Australia during WWII at the entrance of the cemetery. This is the first time Japanese civilian internees and their families were publicly acknowledged in Australia.

Couple of years earlier, when I first visited Murakami’s grave with Dr Lorna Kaino, we met with Dr Keiko Tamura, a historian from the Australian National University there. By Murakami’s grave, the three of us discussed how the Japanese War Cemetery in Cowra needed an interpretive board to explain to visitors that many of the people buried there were civilians like Murakami. In fact many visitors to Cowra also visit the former Cowra Prisoner of War (POW) camp site, and have heard about the Cowra Breakout, and assuming all buried at the this cemetery were Japanese POWs who died during this mass breakout. The visitors walk into the cemetery, and after seeing the graves, wonder why there are babies and children buried there.

The three of us agreed there and then to contact our mutual friend Dr Yuriko Nagata from Queensland University (UQ), the author of Unwanted Aliens: Japanese Internment in Australia During WWII (1996, UQ Press), the definitive book on this subject with the view to  bring about change. The four of us formed a group  Nikkei Australia, and with Dr Nagata as our team leader, for the next two years, worked together with the Cowra Breakout Association and other dedicated organisations and peoples to realise  these series of events.

Perhaps it was  Yasukichi Murakami’s ghost that inspired us to work to facilitate this social change. After all, in his lifetime, Murakami was not only a photographer and artist, but also a leader in the Japanese communities in places  he once lived: Broome, Darwin and in Tatura Internment Camp in Victoria. Not only would he want his descendants to visit his grave – his wife and his deceased children are buried in Darwin – but would like his fellow community members who are buried in this cemetery to be remembered by their descendants, and for all of us to recognise and acknowledge their history.

Having said that, one of the most outstanding aspects of Murakami’s life was that he was not only part of the Japanese community. Historians such as Dr Lorna Kaino and Kate Lance, author of Redbill  tells us that Murakami and his friend and business partner Captain A.C. Gregory have acted as mediators during series of race riots in Broome (1907. 1914 and 1920), and their lifelong friendship “calmly flout(ed) every racial barrier of Broome society.” (Lance). And as such, our symposium consisted of  internment stories from those of Japanese, Italian, German and New Caledonian backgrounds as well as of regional museum curators from Tatura, Hay and Loveday, where the internment camps once were, academic researchers, artists and creative writers who’s work deal with WWII civilian internment in Australia. 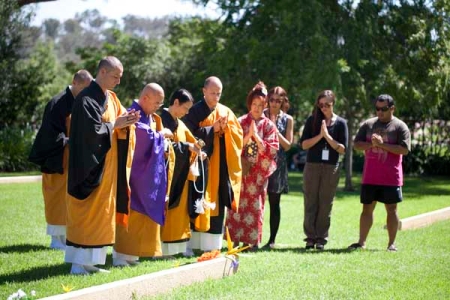 And  9 March was about  remembering those civilians who are buried in Cowra, regardless of their backgrounds. The ceremony began with a ceremony for Australians who died during WWII at the Australian section of Cowra’s War Cemetery, next for those buried in the Japanese section, which not only includes Japanese and Nikkei civilians, but Chinese, Indonesian and New Caledonian peoples who were interned with the Japanese. We then moved to the Cowra General Cemetery to commemorate the Javanese Indonesian political prisoners who were interned and died in Cowra. 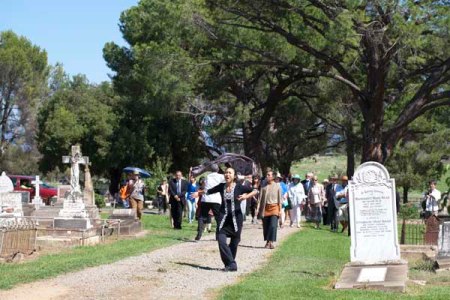 Artists Weizen Ho and Ria Soemardjo leading the attendees through the Cowra General Cemetery from the Indonesian graves to the Japanese War Cemetery as part of a Ceremonial Performance. Photo by Mayu Kanamori

Such were the events in Cowra.

Such were the wishes of Yasukichi Murakami – I believe.