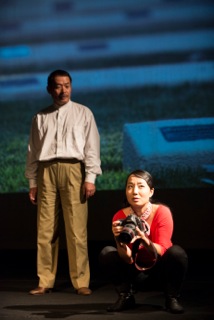 As with my earlier performance works, how I manage to put forth an idea in blind faith, and then after doing the necessary work in small steps over a time,  finding myself in a creative space full of extremely talented and experienced performance makers is truly humbling, uplifting, and in many ways, mind-boggling. Nevertheless, thanks to my collaborators, my research into Yasukichi Murakami’s life and my search for his missing photographs was on its way to becoming a performance work.

In nervousness, I once again held conversations in my mind with Murakami’s ghost.

Have I done the right thing?  Have I made the right decisions? Do you think this is working? Sometimes I lack in clarity if these questions should end with “for you”, “for me”, “for the work itself” or “for the wider good, ” and if the difference in those question endings change  the question and its answers.

Some say I am becoming mad, whilst others say I am lacking in intuition, but  Murakami’s ghost never seems to answer me immediately. And when I think I have heard his voice, I am often unsure if I heard him correctly. As at first hearing, it is difficult to tell whether I am hearing his voice, what I think his voice might be, or that his voice is heard through the filter of my own ego, or a voice from my higher self, pretending I was someone I am not quite ready to become, but wished I was, or simply the voices of others or perhaps other ghosts. So ok,  I do sound mad… but creative development, it was.

The immediate reaction of my collaborators to my “script” appeared positive. They liked it, or so I thought, which made me relax a little. On the second reading of the “script”, however many differing opinions began to surface. Some were structural, others to do with different layers of understanding of the text, material and methods. And strong those opinions were. One thing we all agreed upon was that it was important to tell the story of Yasukichi Murakami. 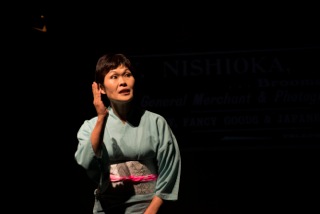 As we exchanged ideas and debated, the written words became spoken words, ghosts found their embodiments, images projected, and by the time composer and sound designer Terumi Narushima joined us in the second week, the “script” had gone through many changes, including the inevitable and often welcome changing back, like a dance moving to and fro between rawness and refinement, creative and receptive, intuition and understanding.

On the last week, we invited a small group of people to a work-in-progress showing.  As pathetic as this sounds, I cried a lot during this week. I was emotional, partly because of fatigue, but mostly because there was something so very moving about working with a group of talented artists who were able to take what I had grappled with for the past 3 years, create and put into shape a work which was shown to potential presenters and partners.

Yasukichi Murakami’s story is beginning to take shape. His voice is slowly being heard through a collective voice and listening of those who endeavour to hear him. 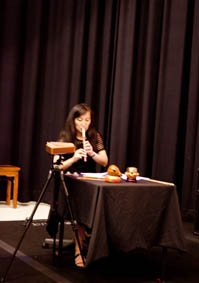