“He was not a man who was taken in by the modern cameras of that time like the Leica or 35mm. He considered that to be toys,” is how Joe Kisaburo Clement Murakami remembers his father’s ways with the camera. I think of the changes in cameras these days with smart phones and apps, and wonder if my carrying around my digital SLR is similar to Yasukichi Murakami’s insistence on being a “ big camera man. Big format”.

I met Joe in his apartment in Tsunashima, a suburb near Yokohama. Joe was born in Australia, and one of the few pre war Japanese allowed to stay in Australia after he was released from internment with his family during WW2 as an enemy alien. He went to Japan in the 1960’s to learn Japanese, and later found work as a translator for a Japanese company and for books such as Letters from the End of the World: A Firsthand Account of the Bombing of Hiroshima. 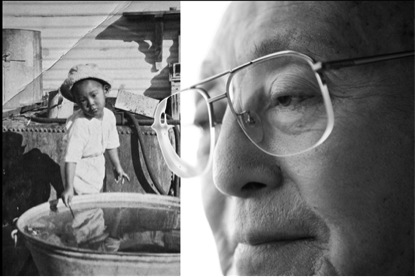 Joe Murakami was born in 1927, around the time when Yasukichi was putting his final improvements to his diving suit design, which he had first patented in 1926. Joe was keen to tell me about his father’s invention.

“I think I used to be a pretty inquisitive boy so I used to ask him all sorts of questions. Even when I was six or seven. And he would give me always some sort of answer. Later I found interest in his diving dress. He told me that the crux of his invention was the regulator that regulated the breathe according to the depth of the diver without the diver having to have to manipulate any valves. That I remember.”

In Broome where Murakami had lived since 1900, many men, including his brother-in-law Masutaro Asari, who travelled with Murakami to Australia in 1897, have died diving for pearls in old-fashioned diving suits. For many years Yasukichi Murakami continued experiments to create a safer diving suit.

Murakami’s improved diving suit design patented the year Joe was born, and he was invited by Heinke, manufacturers of the traditional diving dress to visit London to develop a prototype of his design, but for some reason, did not go. Some say it was because he wanted to stay with his family. Some say it was because his friend and business partner Captain A.C. Gregory did not want Murakami to leave his side.

Murakami’s patent fell due for renewal whist he was interned during the war and he was not able to renew it. In 1943, a French engineer Émile Gagnan patented scuba apparatus with identical mechanisms to that of Murakami’s.

I remember Murakami’s attempt at Australia’s first cultured pearl farm with Captain Gregory and how the authorities had closed it down. Joe said that Johnny Chi Snr in Broome told him that he remembers seeing a successful cultured pearl from Murakami’s failed pearl farm. That makes two inventions in Australia by Yasukichi Murakami, unattributed to his genius due to “course” of history. Perhaps this blog and project can contribute to the flow of history in a fairer way – here and now.