As promised, Tomoko Yamada directed the photo shoot that took place at the Japanese Cemetery in Broome.

Emulating the historical photograph of Yasukichi Murakami and his friends taken on the eve of the Bon celebrations sometime in the late 1920’s or early 1930’s, Tomoko stood in place of the buddhist priest who was present, myself in place of Murakami, my friend Cauline Masuda, the oldest daughter of the oldest Japanese former pearl diver in Broome Akira Masuda, Tomoko’s friends Yurie Tamagawa, Mia Tucker and Michiyo Tucker stood by Takazo (Tomasi) Nishioka’s grave.

Strange how one thing leads to another unexpected turn of events. In search of Murakami has lead me to collaborate with Tomoko to create this contemporary photograph of Japanese diasporic women in Broome.

Then as a result of this photo shoot I have decided to organise a fundraising event at my friends’ Yuga Cafe & Gallery in Glebe, Sydney so that a Japanese buddhist priest could travel to Broome to read a sutra and hold a kuyo ceremony during the next Bon season.

The Japanese Cemetery in Broome is in need of a buddhist priest. 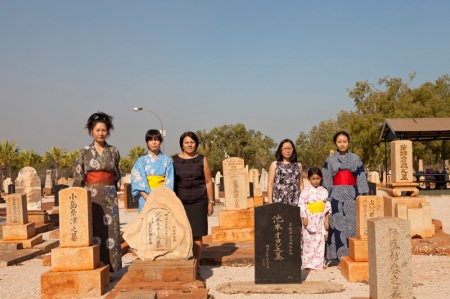